Summary: In the fall of 2012, I created a “Children’s Eye Health” campaign. Set to coincide with children returning to school, I started the campaign by creating a sales event, and advertising it through print, our radio ads on 97.1FM, and online.  I created the following image to promote the campaign on our website and social media platforms:

The second phase of the campaign was to create brochures with Iverson-Tomasino-Goerss Eyecare promoting eye health and regular eye exams.  We didn’t have a budget allocated for the campaign, so I contacted a local public school district who I knew was starting their annual eye checkups in a few weeks.  After receiving permission, I printed copies of the brochure and distributed them at the nurse’s office in every school in the district.  I also distributed the brochure at local churches, daycare facilities, and community centers. The brochure can be seen below (click to enlarge): 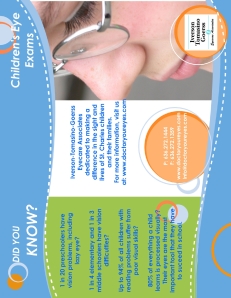 The final piece of the campaign was to write a blog post that gave a more in-depth look children’s eye exams, and signs that indicate a child has vision problems. Advertised through our social media, the blog post hit 100 views in the first two hours. The blog post can be seen HERE.

My Duties: I handled every aspect of the campaign. I created the campaign, sought approval from the doctors and optical manager, created the graphics and brochures, wrote the content for the brochure and blog post, wrote copy to be advertised during the Dave Glover radio show that we advertised on, and arranged for the brochures to be distributed as venues. To track the success of the campaign, I created a questionnaire that was handed to new patients to answer at their arrival.

Results: Our scheduled children’s eye exams rose by 22% during the month of October.